Coron is on Basuanga Island, located just north of the more popular Palawan Island. Touted as one of the Philippines top diving areas, we thought we’d best go for a couple of nights, and as we were scheduled to meet our dear family/friends Steve & Maddy in El Nido (on Palawan) in a few days it seemed ideal.
We arrived to a busy little diving/fishing town and booked our diving trip for the next day. It was more bustling than usual we were told as it was Chinese New Year.

STOP!!! FREEZE THE BLOG!!!!!
This is where I should be inserting the line,
“Yikes!” we thought, “Best book our ticket outta here ASAP! It might be tough if we leave it a while with all these people about!”
However, foregoing any common sense, read on for what actually happened…
PRESS PLAY

We enjoyed a quiet night in at our accommodation, only partaking in a few beers with our hoteliers Patrik & Tezz before resting our heads. Our first dive was in a deep lake which can be described as nothing less than a natural wonder of this world. Barracuda Lake is home to some of the most dramatic thermoclines in the world. A thermocline is a layer in a large body of water that sharply separates regions differing in temperature. Thanks to Dictionary.com for that one as I had no idea how to truly describe it. Basically, picture swimming through a visible yet translucent "wall," where on one side you are seriously hot at 38 degrees, and the other freezing your tush off at 26. I would watch my wife pass through said wall and transform into a somewhat ethereal shape, still within arms reach. So much of the underwater world seems alien to me, nothing more than this phenomenon. 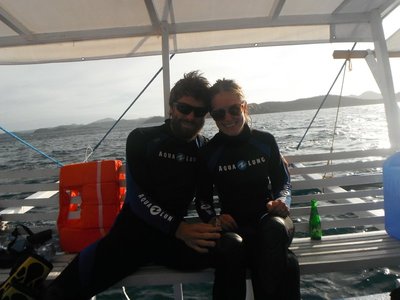 Our second dive was through the sunken Japanese cargo ship “Olympus Maro.” This was our first swim through in a wreck and it was AWESOME. Weaving through small holes, exploring the engine room and the huge funnels was truly an unforgettable experience.
We had a beautifully relaxing ride back to Coron, marvelling in the exquisite sunset. 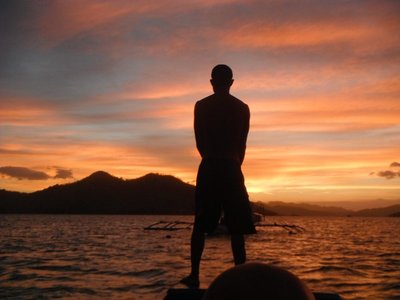 Our instructor revels in the stunning Coron sunset

After our traditional post-dive beer, we finally decided to book our boat transfer to El Nido. But it was too late. All the official transfers were fully booked out for a week. We were stranded. Granted, we were stranded on a tropical island, but forget all that, I’m trying to be dramatic.
We bumped into some French people (about eight of them, all around our age,) who were in the same boat as us, or should I say not in the same boat as us. I’m sorry that was a terrible pun, I can’t blame you if you turn to another blog.
They discovered a somewhat “illegitimate” way south departing in two days. It was just a chance, but one we were willing to take.
All kinds of thoughts ran through our minds the following day, such as,
“What will we do for a week if this falls through” as we sufferingly snorkelled the turquoise waters, and
“I’m not sure we could possibly keep up this hardship and boredom!” as we soaked in the hot springs, sipping our chilled pilseners.
We met up with the French (I’m sure they all have names, but there were eight of them so I’m sure “The French” is quicker, and I’m quietly hoping that you all have an octet of beret donning men in blue and white striped shirts holding breadsticks dancing in your heads… but I digress.)
We met up with the French and they told us it was on. We had passage on an “illegitimate” vessel heading south to El Nido at dawn. Just like that we were pirates. Barnacle covered buccaneers to be hidin’ in the hull as our mighty pirate Cap’n battled the law and the seven seas to bring his cargo to port… ARRRRRR.
My father taught me an important lesson in life. "Always expect a paddle and a sandwich." This referred to a trip we took on the Great Barrier Reef when I was a kid. He told us to only expect a paddle and a sandwich and anything greater than that was a bonus. So, on this particular trip when we were presented with a deluxe cruiser and an all you can eat lunch that included endless prawns, scallops and other delicious seafood, we were totally ecstatic. Since then this philosophy has become an oft applied creed. This did apply for the trip ahead, however the paddle was snapped in half and the sandwich was not only filled with Vegemite 2.0, but it was also half eaten.
We had heard rumour of these illegal ships; with some of the worst cases being insanely overcrowded longboats, the travellers bags completely soaked in the choppy sea, no toilet to speak of, and the biggest worry of all was that due to police checking boats docking in El Nido, we would be dropped off at a point miles from our destination, and left to our own devices and survival tactics to get there (or more than likely a jeepney lying in wait to to take us with a price tag relative to purchasing your very own jeepney.) 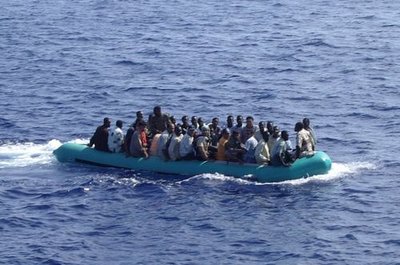 The "Paddle & a Sandwich technique...

In preparation for this, we hid our doubloons in half empty packets of cigarettes, books and clothes in case we got robbed. Consider us cowardly if you will, but I prefer careful, considerate conquistadors.
We nervously brought our belongings to the landlubber who organised this for us. She promptly had her deckhands take them directly to what we perceived to be our equivalent of the Black Pearl which we boarded shortly after. The wreck in question turned out to be a luxury dive boat with all the trimmings that had just concluded a four day cruise from El Nido the previous day. She had to return to El Nido so the owner made some extra cash by ferrying us all back simultaneously. We were captained by two young men who had more of a likeness to Jude Law and Orlando Bloom than Blackbeard and LeChuck. They oversaw our comfortable ride back with a smile and a song; which included lounging in a hammock, playing cards, oh and indulging in our fully cooked lunch… Oh yes, it’s a pirate’s life for me. 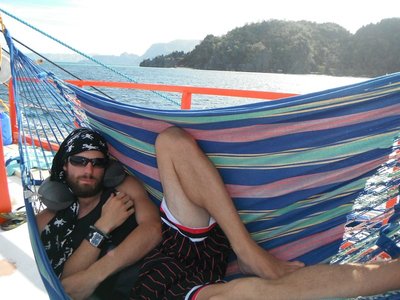 Posted by roamingbullocks 05:21 Archived in Philippines

Previous Next Table of contents

I love the "paddle and a sandwich" technique!

Comments on this blog entry are now closed to non-Travellerspoint members. You can still leave a comment if you are a member of Travellerspoint.

If you aren't a member of Travellerspoint yet, you can join for free.